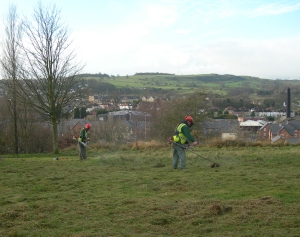 Day 2 of the regeneration; Peter Stell and Ken Newsholme from Pudsey Landscaping,  are hard at work with their strimmers – not quite as picturesque, maybe, as the large scythes that used to be used for such a job !!   The first task is cutting down the clumpy grass,  a feature of land used by ‘many dogs’,  clearing the entrances,  and making the paths wider and more visible, so they don’t turn into muddy tracks with the wetter weather.

There has been a great deal of interest in what is going on, Peter tells us, and lots of folk have stopped to chat.  People are thrilled that the Park is returning to it’s former glory,  and many have stories to tell of what they used to do there;  as we’ve already found.  We’ve asked Peter and Ken to ask people to put their stories on the site in the Your Stories of the Park section – it’s turning into one of the most popular pages.   You might also like to look at the pages on the ecology, the geology (the link with the Airedale Glacier), and the history of how this came to be a people’s Park.

David Myers, has been filming it all for ‘Rise of the Phoenix’ !!

Director and Vice Chair of Friends of Parkinson's Park CIC, Chair of Aireborough Neighbourhood Forum and Facilitator of Inskip One-Name Study. Has a degree in Local History (University of Cambridge), and Economics (University of Leeds). Now retired after a career as a Business Analyst and Advisor.
View all posts by Jennifer Inskip Kirkby →
This entry was posted in Regeneration and tagged dogs, paths, Pudsey Landscaping, stories. Bookmark the permalink.
Loading Comments...