Bird Watching in the Park 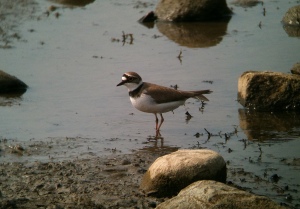 Darren Shepherd of Nethercliffe Road, is a keen ornithologist, and has left this fascinating comment on the ecology page, which deserves greater prominence.

“I would like to add a few more birds to the list of those seen in the Park. The rarest of the bunch, in the past few years, has been the successful breeding of Little Ringed Plover on the building site.”  This is a wading bird, that likes gravel pits and river shingle beds.  “Another wading bird that I suspect has bred in the area is the Oystercatcher” a bird that is regularly found on the coast but has started to move inland.  “Another regular bird is the Redshank“, which likes damp habitats such as salt marshes and flood meadows.  The sightings of these birds would link in perfectly with the fact that the lower slope of Clapper Brow and Great Brow have many natural springs, and the land is quite boggy – the Kel of Kelcliffe, means spring.  When Crompton Parkinsons were in residence they controlled this water flow as best they could, but over the years nature has reasserted itself.

Darren continues – “On to raptors (birds of prey) now: the Sparrowhawk has bred in the Park and a Red Kite is now regular seen flying overhead.  The Common Buzzard is seen occasionally along with the Peregrine and Hobby on a few occasions.”

“All three hirundines (zoological name for swallows and martins), Swallow, House Martin and Sand Martin,  hunt over the area and breed near by. One species that has been lost due to the demolition of the factory is the Swift, but  it still breeds on nearby Oxford Road.”

Darren finishes with the idea that it would be very beneficial if some sort of wetland area was created at the bottom of Clapper/Great Brow.  This is an excellent idea, and one which we will include for discussion with the Friends on the long term plans for the Park.  Darren has also promised more posts about the birds of the Park.