Peter Coates has started laying the copse hedges this week – Yorkshire Style.   Hedge laying is a traditional method of hedge management that dates back to pre-Roman times; there are different styles for different areas of the country, depending on the type of farming.  Laying is mostly used when hedges have become overblown – as is the case with the Park’s – although a hedge can become so bad that not even hedge laying will bring it back.  Fortunately, these hedges have not quite got to that stage – although the situation was close.

To recreate a viable, health, hedge the tall stems are cut almost through at the base, and then laid over at an angle of around 35 degrees: the cut stems, called pleachers, are tucked tightly together and lay parallel to each other – this encourage vigorous growth.

Historically, hedges were designed to protect crops from stock, and to act as shelter.  However,  they are also havens for wildlife.  Sadly they have become a declining habitat since the second World War.  In 1946 there was 500,000 miles of hedges in England; since then over 300,000 miles (60%) of hedge has been lost to modern farming practices, road, housing and  industrial development.   Today, neglect and poor management is the greatest cause of loss, although renewed building on green belt, if allowed, will also take its toll.   Hence, FOPP’s desire to restablish these hedges, and to do so by traditional means to showcase a craft that could otherwise be lost. 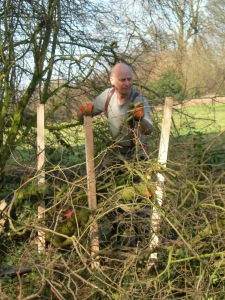 Laying the pleachers at 35 degrees

The Parkinson hedges were planted sometime in the early 1940’s and are hawthorn.  Interestingly, from a personal perspective, Peter’s mother came to work at Parkinson’s during this time to help the war effort – she maybe walked past the hedges on a lunch break in the Park.  Peter is also adding holly seedlings that are growing around the area, as it will help provide a more diverse habitat (a feature of old hedges), and a stronger barrier.  The hedge this year will put on a lot of budding growth, and will then thicken up over the next two years – when normal cutting can then be used for management.   It should be a particularly good habitat for blackbirds, thrushes and small mammals.    The work should take a couple of weeks.

Director and Vice Chair of Friends of Parkinson's Park CIC, Chair of Aireborough Neighbourhood Forum and Facilitator of Inskip One-Name Study. Has a degree in Local History (University of Cambridge), and Economics (University of Leeds). Now retired after a career as a Business Analyst and Advisor.
View all posts by Jennifer Inskip Kirkby →
This entry was posted in Ecology, History, Interesting Features, Regeneration and tagged copse, hedges, laying, Peter Coates. Bookmark the permalink.
Loading Comments...