Posted on May 8, 2012 by Jennifer Inskip Kirkby 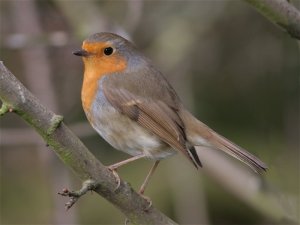 This morning I met up with David Myers to make a film of the bird life in the park singing one of nature’s glories of this time of the year – the dawn chorus. We met at 5am; the weather was calm but very cold for May.  The morning started well,  with various warblers and other passerines singing, but not particulary showing well – camera shy maybe?  One bird that did appear was the robin, which at least gave David some good shots.

Other birds we heard, included the willow warbler, chiffchaff, blackcap, garden warbler, great tit, blue tit, and wren. However, around 5.30 we decided to call it a day as most of the birds had stopped singing or moved away from us. Due to the unseasonally cold weather a lot of summer migrants have been late arriving from the wintering areas in Africa and as such the park was quieter than usual at this time of year.  On a positive note there should be many more years that the people of Guiseley can enjoy the sights and sounds of Parkinsons Park, without houses encroaching on the area !!

Director and Vice Chair of Friends of Parkinson's Park CIC, Chair of Aireborough Neighbourhood Forum and Facilitator of Inskip One-Name Study. Has a degree in Local History (University of Cambridge), and Economics (University of Leeds). Now retired after a career as a Business Analyst and Advisor.
View all posts by Jennifer Inskip Kirkby →
This entry was posted in Bird Watch. Bookmark the permalink.