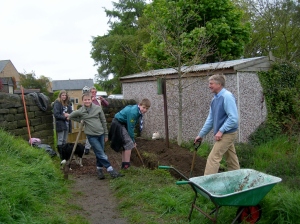 A big, big, BIG thank you to the boys and girls, Scout leader Keith Park, and, especially, Group Scout Leader Maureen Cooper of the 15th Airedale Scouts, for coming to spend their Scout Community Week time on the Park.   As we make our case with Leeds City Council, to have the Park officially listed as a community ‘green’ asset, rather than potential housing land,  you have played a vital part in helping us do that.

Thank you as well,  to all the Friends who turned out to help improve the entrances; the work of digging out nettles, hedge garlic, and brambles, along with old concrete and clinker was not easy – it was, perhaps,  fortunate it was neither a hot, nor a wet day.

The work parties fell into four groups.  In the copse,  the Scouts built a new compost bin out of wood donated by B&Q Keighley.   Over at the Oxford Road entrance,  Sue Jackson and Steve Magson,  soon had a deep,  straight, ditch dug,  to take the artistically arranged logs from the felled sycamore – “the Scouts did really well,  bringing all those heavy logs up the hill”,  Sue beamed. 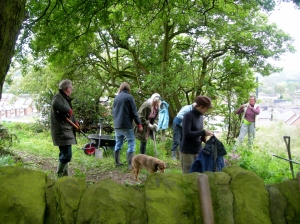 Meanwhile,  at the sheepfold,  the setting was slowly evolving,  for an evening sunset retreat:  Martyn Smith from the Otley branch of dry stone wallers, got out his hammers to start rebuilding the wall,   ecologist Josie Brooks, helped identify plants to keep, and planted up the area with small native plants, many again donated by B&Q;   whilst Richard Lamb, Caroline Herries,  Maureen Cooper,  John, and little Josie Tate dug for victory.

Over at the Hillside steps  Jon and Nicola Denson,  started the painting for their tunnel entrance,  before coming to help at the sheepfold.

All of this was ably supervised by project manager, Andy Cheetham;  who ran around with biscuits for the troops and nails for the Scouts.   The morning was  captured for posterity on film by David Myers,  who waves his sound boom in your directions, and starts asking questions.   Who knows where his film of the Park regeneration might lead – apart from the National Film Archives, who will eventually get a copy!!

As tiredness set in,  and lunch beckoned, a smartly dressed figure wandered incongruously across the Park;  this turned out to be local MP Stuart Andrew.  After a busy surgery in Guiseley,  he had come to see what the Scouts and Friends were up too.   He had not been in the Park since a year or so earlier, when he had been trying to eradicate the ‘drug takers’, from as far away as Bingley,  who had started to congregate in the wilderness the Park had been allowed to become. 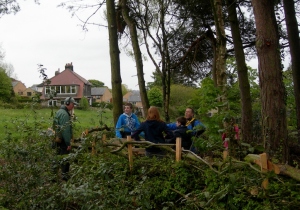 Stuart was amazed at the difference he found – and hopefully Guiseley might get a mention in the Commons, as a place where ‘localism’ is happening.  But, then, did it really ever go away? The name may have changed from ‘bob a job’,  to ‘community week’,  but the Scouts date back over 100 years, to 1907,  and a core principal of Lord Baden Powell’s was that  “Every Scout ought to prepare himself to be a good citizen of his country and of the world. It is something to be good, but it is far better to do good.”

Maureen tells us that the Scouts are short of leaders, and have a waiting list of children wanting to join.  So,  if anyone would like to join Chief Scout Bear Grylls in inspiring young people in outdoor life skills, self sufficiency, and community spirit,  Maureen is the lady to speak too.   Meanwhile,  FOPP hopes to see the Scouts again very soon, after they have chosen a name for the sheepfold entrance – we salute you.

Scouts and Explorers Who Took Part

Director and Vice Chair of Friends of Parkinson's Park CIC, Chair of Aireborough Neighbourhood Forum and Facilitator of Inskip One-Name Study. Has a degree in Local History (University of Cambridge), and Economics (University of Leeds). Now retired after a career as a Business Analyst and Advisor.
View all posts by Jennifer Inskip Kirkby →
This entry was posted in Ecology, Events, Friends, Regeneration and tagged entrances, scouts, Stuart Andrew. Bookmark the permalink.