Bird Watch – Gone But Not Forgotten, by Darren Shepherd

Hello again and welcome to the next bird watch post. This post is about some very rare birds that took up residence on the Bellway building site a few years back, but have now gone.

The first bird is the “little ringed plover” a superb little wading bird that colonised the UK as recently as 1965, with just the odd pair breeding at a gravel pit “down sarf”. These birds decided to set up home in Guiseley on the site of the demolished lamp works of “Crompton Parkinsons”,  which,  due to the reccesion,  had been left for a few years before work commenced. The old bricks from the factory were crushed on site and spread out as hardcore.This allowed various puddles and pools to become established and alive with insects and wild vegetation, providing ample food for the birds. The birds raised young for at least 3 years, but were predated at least once,with cats and corvids the main suspects.

As the building site has progressed, we have lost the birds,  but if we can create a wetland area with gravel areas,we could see them again ? 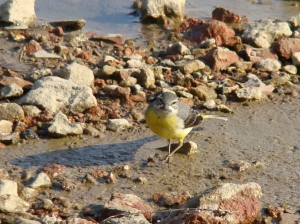 Another very attractive bird on the site has been the “grey wagtail”, a rather dour name for such a colourful bird. This bird is described in the books as inhabiting “fast flowing streams and watercourses”. Not “demolished lamp factory with re-cycled hardcore”. So,  all in all a good result while it lasted.

Oh yes,  before I forget.  If you look at the right leg of the little ringed plover chick, below,  you will see a metal leg ring

which was fitted by a local BTO ringer(British trust for ornithology)to 3 chicks in 2009.

So lets look forward and hope the area turns up some more surprises in the near future !

Director and Vice Chair of Friends of Parkinson's Park CIC, Chair of Aireborough Neighbourhood Forum and Facilitator of Inskip One-Name Study. Has a degree in Local History (University of Cambridge), and Economics (University of Leeds). Now retired after a career as a Business Analyst and Advisor.
View all posts by Jennifer Inskip Kirkby →
This entry was posted in Bird Watch. Bookmark the permalink.
%d bloggers like this: