On The Walkers Map 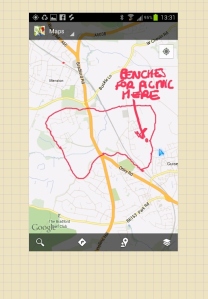 Marked on the map grapevine.

During a walk in the Park at lunchtime,  I came across a dozen or so walkers sitting on the new Park benches and eating their lunch.  They were apparently from Bradford’s University of the Third Age, on a hike around Guiseley and Menston.

Starting at the station,  they were walking across the Park,  and up to Fairy Dell, then down to Menston, around High Royds, and back to Harry’s (Wetherby Whaler) for a welcome Fish and Chip tea.

They were very pleased with the benches as a place to have a picnic, and have now officially marked them on walker’s grapevine map, as a great place for lunch on a walk.

So, as they say in the Marketing world,  I think we can expect more footfall in the Park in the future.   Which is great news, as the more it is used as a community asset, and the more it appears on walkers and tourist routes,  the less likely it is to be developed and the more likely we can get grants to look after it.

Director and Vice Chair of Friends of Parkinson's Park CIC, Chair of Aireborough Neighbourhood Forum and Facilitator of Inskip One-Name Study. Has a degree in Local History (University of Cambridge), and Economics (University of Leeds). Now retired after a career as a Business Analyst and Advisor.
View all posts by Jennifer Inskip Kirkby →
This entry was posted in Facilities and tagged benches, maps, walkers. Bookmark the permalink.
%d bloggers like this: