2013 Season Gets Off To ‘Fruitful’ Start 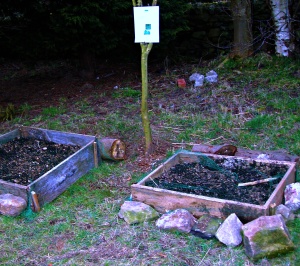 Inspired by the example of Incredible Edible,  Sue Jackson and Steve Magson have created some raised beds near the Farm Gate Entrance,  to plant herbs and other produce.   Just one of the tasks completed by the ‘friends’ on the first of the 2013 monthly Park upkeep days  – and,  as with the first tree planting event a year ago,  the sun turned up to warm endeavours.

Richard Lamb and Barbara Winfield,  did a fantastic job clearing up several large bags of winter debris,  including broken sledges;  maybe some discarded sledge parts should be left as a time capsule for future archeologists.

Darren Shepherd and Andy Cheetham, planted a wildlife shrub border along the wall of Little Kelcliffe with plants donated by the Woodland Trust;   Nicola and John Denson replenished the shrubs on Jubilee Walk which had suffered from over zealous strimming, and Josie Brooks landscaped more appealing looking shrub island along the ridge path and planted bulbs.

Director and Vice Chair of Friends of Parkinson's Park CIC, Chair of Aireborough Neighbourhood Forum and Facilitator of Inskip One-Name Study. Has a degree in Local History (University of Cambridge), and Economics (University of Leeds). Now retired after a career as a Business Analyst and Advisor.
View all posts by Jennifer Inskip Kirkby →
This entry was posted in Friends, Regeneration and tagged Incredible Edible, sledges, woodland trust. Bookmark the permalink.
Loading Comments...