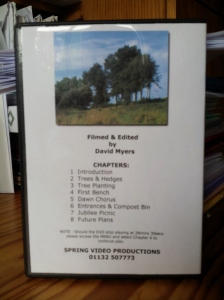 David Myer’s one hour video ‘ Parkinson’s Park – A New Chapter’,  filmed between November 2011 and June 2012 is now available for sale.   The cost is £11.50 including postage and packaging, let us know if you would like a copy at parkinsonspark@gmail.com.

The film tells the story of the Park’s regeneration, and features interviews with many of the people involved in the various projects and events.  David is intending to eventually deposit copies of the film in the Yorkshire Film Archive as part of the All Our Stories project – (although his film was not funded by the Heritage Lottery Fund) – as it is an important part of local history.

Director and Vice Chair of Friends of Parkinson's Park CIC, Chair of Aireborough Neighbourhood Forum and Facilitator of Inskip One-Name Study. Has a degree in Local History (University of Cambridge), and Economics (University of Leeds). Now retired after a career as a Business Analyst and Advisor.
View all posts by Jennifer Inskip Kirkby →
This entry was posted in Friends. Bookmark the permalink.
%d bloggers like this: