All Our Stories – Out of the Mists of Time

The purpose of the All Our Stories, HLF grant, is to tell the story of the ‘ordinary’ people, who have used the Park land down the ages.

We knew the recent history,  from when the Parkinson brothers acquiring the land in the late 1930’s for a community facility.  We  then established that Kelcliffe House used to be a tannery,  as far back as the 17th century. Then, in August, we got the geophysics report confirming that the Park evidenced many historic phases of agriculture – the earliest possibly being Early Medieval (700AD to 1,000AD); which would be fascinating, as the Guiseley area was laid waste during the Harrying of the North in 1070: which is why it doesn’t appear in the Domesday book of 1086 – there was nothing of value to record.

So, we have spent the past months filling in the intervening centuries;beavering away in various archives putting together scraps of information from tithe books, land deeds, manor court records, old newspapers and family history sources. Amongst our finds has been a lovely little map of Guiseley glebe lands from 1724, with hand drawings and the location of Celclif (now the north part of the Belway estate is) which is labelled as indifferent land.  This map also confirms Guiseley did have a ‘feudal’ middle field (to the left of Moor Lane) -something that some history books have doubted.

Slowly, we are recreating forgotten lives and times; although as with any ‘blue sky’ jigsaw puzzle, there are a lot of head scratching pieces.  It doesn’t help that field names, which give a good indication of  land use, have a habit of changing spelling if not name – and we have had to relearn how many perches in a rood, and roods in an acre, to try to make sure we have the right field.

So, what do we know now?   Our key date is 1719, when the Manor of Guiseley and Esholt,  owned by Sir Nicholas Shirbourne, Duke of Norfolk,  was sold to a group of Guiseley Freeholders – William Long, Timothy Overend, John Bailey and John Overend for the enormous sum of £13,800.  We have just discovered all the deeds that span this event – a  treasure trove of information.  Before 1719, the land was leased via the Manor Court for different times eg 99 years, or 4 score and 19 years,  to the mostly husbandmen and yeomen of the area.  After that it was sold on to a variety of upcoming clothiers, woolstaplers, blacksmiths, maltsters and tanners.

We have  been tracing back, not just who sold the land to whom and when,  but who used the land as tenants and for what purpose. Looking at the tithe records it appears the enterprising field tenants were practicing Charles Townshend’s modern farming techniques during the 18th century agricultural revolution;  rotating wheat, potatoes, oats or barley, and peas: matching this to the geophysics information will be interesting .

One of the potential Early Medieval lynchets on Crooked Lands

Having found land owners and users, we have turned to family history sources;  this is where we have discovered just how intertwined local families were.  It is unfortunate for us,  that the holders of the Crookland fields seemed to be called John Brown,  whilst those around New Dykes were Smiths !!  Thank goodness for the Blezards and Unthanks.

Of the people who farmed the Park, there were several  Quakers, the Baileys and the Blezards – before the Act of Toleration in 1689, (which stopped the overt  persecution of Quakers), and the 1697 building of the Quaker meeting house at Rawdon, Guiseley had the local Quaker burial ground .  Most tenants seemed to have some standing in the community, being Parish Clerks, or taking on other community roles – a number have family graves in the church and churchyard.  Many had textile related occupations, and one at least, Thomas Burnett became a Bradford merchant – although unfortunately he went bankrupt in 1778 and had to sell his lands in a local Inn. 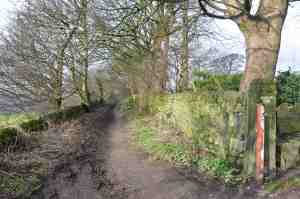 Kelcliffe Lane dates in this form from 1709

We know that Kelcliffe Lane was carved out for ‘carts’ and ‘drift beasts’  around 1707 as the way to the tannery and tenements at  Kelcliffe House.   Before that it was a ‘bridle sty’ and people had been driving their ‘wagons’ over Crooked lands (the field on the side of the park nearest Oxford Avenue) to get about the area. We are not sure what the problem was with this, but it incurred a fine or ‘paine’ of 3s 4d ; so it was serious anti-social behaviour!!  It is just possible that it was a farmed rabbit warren, as suggested by the alternative field name ‘Clappers’, and they were squashing the rabbits – but without better evidence this is mere speculation.  We do now know that Clappers goes back to at least the early 18th century, so we are not talking about a Victorian industrial warren.

We also know now that the actual fields named Great Kelcliffe, Little Kelcliffe (the flat part of the Park), and Kelcliffe, were not around Kelcliffe House (dated to at least the 17th century), as you might expect;  but around what is now Kelcliffe Mount.  If you look carefully, you can see that what seem to be odd triangular fields, together form a north/south square.  Kelcliffe Mount itself being built by James Padgett Brown (interesting story here)  sometime in the 1870’s.  So, which was the original Kelcliffe?

Looking at local housing for context, Kelcliffe House and its two tennaments at Kelcliffe Fold, together with Flattfield House at the other end of the Lane are the oldest.  Probably followed by Crooklands.  New Dykes was  built around the 1820’s, followed by Kelcliffe Mount.  Then finally, at the turn of the 19th century,  Claremont.  The older houses had orchards, barns, pigeon lofts, gardens, and what is described in a 1778 property advertisement as  ‘a moft beautiful profpect’: it seemed a habit for houses to be split into different sections for different parts of a family, or even different families.

This then, has given us a good feel back to the 1600’s, we now need to polish off our Latin and see what we can find out that is earlier than that – as a help we are considering doing metal detecting and test pits in the Park to find dating evidence of usage.

If anyone, would like to help in this historic research, please contact us.  There is a lot to do, and if you like solving puzzles this could be an ideal winter occupation.

To help locate places mentioned on a map, see the map view on History Pin, scroll down the page to the map.

Director and Vice Chair of Friends of Parkinson's Park CIC, Chair of Aireborough Neighbourhood Forum and Facilitator of Inskip One-Name Study. Has a degree in Local History (University of Cambridge), and Economics (University of Leeds). Now retired after a career as a Business Analyst and Advisor.
View all posts by Jennifer Inskip Kirkby →
This entry was posted in All Our Stories, History. Bookmark the permalink.
Loading Comments...