As part of Aireborough’s World War I commemorations, Parkinson’s Park have been sowing poppies.  The idea is for the poppies to be in bloom on 4th August, when a whole host of events and special features are due to start as a means to recognize the sacrifice and say ‘thank you’ to all the local people who took part in the First Wold War,  in whatever way.

On the morning of Wednesday 30th April  Chris Parapia joined in with Oxford Road Pre School Playgroup  to sow wildflower and poppy seeds at the play area in front of the playgroup building.

In the afternoon six pupils from Guiseley Infants School and their teachers, Daisy, Matilda, Oliver,Jake Evie and Harriet and their teachers Janet Munnings and Helen Gastel,  walked up to the Park,  and worked very hard sowing seeds in the newly extended wildflower area by the Farmgate; helped by Betty, Josie, Chris and Barbara from the Friends. 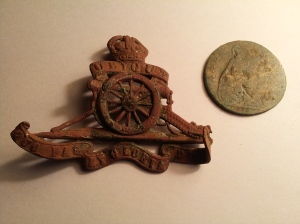 Brass Cap Badge from The Royal Artillery & 1914 Half-Penny recently found in the Park.

The poppies should give colour on August 4th, when there will be a wreath laying ceremony at the cross in Guiseley at 11am followed by flowers placed on the war graves in St Oswald’s cemetery: Guiseley Brass Band will be playing  music from 1914, from 10.30am.  Later in the evening the Guiseley churches will be holding an evening reflection.  Nationally there is to be a ‘blackout’ from 11pm when people will be asked to turn off their lights, and light a British Legion candle.  Special  WWI candles will be available from The Royal British Legion’s partner,  Marks & Spencer’s from early July,

The Aireborough Commemmorations are designed to bring together in remembrance the townships of Yeadon, Guiseley and Rawdon – not forgetting Hawksworth and High Royds, whose families were all part of the Parish of Guiseley.  The events will last from 2014 until 2018 and compliment national events.    The idea was started by Stuart Andrew MP, last year,  after discussions with the local Royal British Legion.  The organizing committee, of which Parkinson’s Park is a member, along with Guiseley in Bloom,  Guiseley Carnival, Rawdon Parish Council, local churches, and the British Legion,  is chaired by WWI historian Cllr John Davies from Rawdon Parish Council.   Anyone who wants to be part of the committee,  or has an event they are organizing that could link into the WWI programme, should contact John on 0113 250 4403.

Director and Vice Chair of Friends of Parkinson's Park CIC, Chair of Aireborough Neighbourhood Forum and Facilitator of Inskip One-Name Study. Has a degree in Local History (University of Cambridge), and Economics (University of Leeds). Now retired after a career as a Business Analyst and Advisor.
View all posts by Jennifer Inskip Kirkby →
This entry was posted in All Our Stories, Events, Friends, Regeneration. Bookmark the permalink.
Loading Comments...