LIDAR data showing the park and the various ridge and furrow, including an old medieval ridge

Throughout the Summer Barbara Winfield and I have been ploughing on with the research for All Our Stories: we now have a good record of owners and tenants throughout the eighteenth and nineteenth centuries (which will be useful for local family historians), and have even been able to get back into the sixteenth century manor court rolls, with the kind help of Stonyhurst College in Lancashire, where some records are kept.

However, our most fascinating discovery has been with the help of English Heritage and LIDAR data (a remote sensing technology that uses high altitude laser to produce reflected light off dips, lumps, bumps and ditches – more information here).  With this, academic papers,  and our research on the evolution of local field names,  we have established that the whole Kelcliffe Area, including the park,  is awash with ancient ridge and furrow,  and field lynchets : indicating that the area has probably been farmed in open fields since early medieval times around 600AD – 1000AD and then into the high medieval period 1000AD – 1400AD (remembering that William I laid wast to the area around 1069).  There is also the possibility that some markings in fields around the park show the remains of Romano-British enclosure systems.  This would link with the enclosures that have been found on The Chevin. 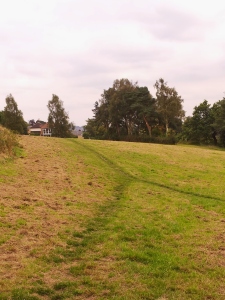 This is the medieval ridge shown on the above LIDAR map 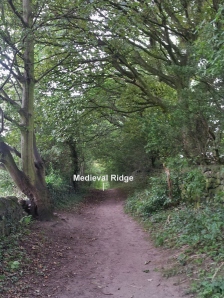 This is the same ridge going across Kelcliffe Lane. The lane dates to the early 1700’s.

We now need to write our findings into a report and seek academic help with specialists on verification,  probably with a field survey.   At some point in the future, we also want to obtain a grant to do some test pits to see if we can find dating evidence – but that is for the future.

Director and Vice Chair of Friends of Parkinson's Park CIC, Chair of Aireborough Neighbourhood Forum and Facilitator of Inskip One-Name Study. Has a degree in Local History (University of Cambridge), and Economics (University of Leeds). Now retired after a career as a Business Analyst and Advisor.
View all posts by Jennifer Inskip Kirkby →
This entry was posted in All Our Stories. Bookmark the permalink.
Loading Comments...