Many Incidents of Arson Suspected in Guiseley This Week

Well, we’ve had Candlemas this week, the mid-point between the shortest day and the spring equinox, so Spring is on its way; with lighter nights and hopefully all those daffodils planted last year bursting through and bringing joy to the heart.

What does not bring so much joy though, is the increasing vandalism and suspected arson in the Park – and in Guiseley in general.  We, the community as a whole need to tackle this, and quickly.

Today, we had a report by a dog owner of a ‘snare’ left in some branches near a path: snare, saw or garotte, the sharp implement was  hidden, quite possibly deliberately,  in fir-tree branches and put by the top path in the Park for dogs, children, wild animals or adults, to injure themselves 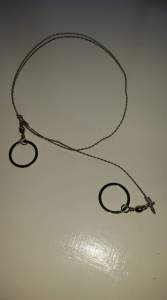 Piecing together the story: around 11.10pm on Saturday night a group of young people were seen with torches on Kelcliffe lane and in the Park, near the tall fir trees by the Park Gate.  They were sawing off branches of the fir-tree – badly; possibly using the implement later found.

The branches were taken to the area near the top bench, where there was an attempt to start a fire with any wood that could be found.  Three tins of Bull Brand lighter fluid was found (is this sold around Guiseley?) as well as an unrecognized plastic bag and lots of rubbish and mess. 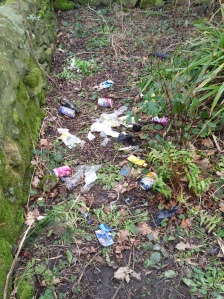 Other Suspected Arson Attacks in Guiseley

This comes on top of a week of arson attacks,  on Oxford Road Junior School,  The Football Club and the bins behind Next on the Retail Park.   Apparently the fire brigade have been called out many times this week to attempts to start fires there.

In addition,  a week or so ago,  the new bird table in the Park was burnt to the ground, following the ‘two insect hotels’ before Christmas, and an increasing amount of damage being done to trees through the breaking of branches. 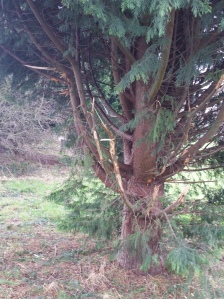 The Parkinson’s Park Committee is meeting with the Police this week – to discuss the action we will take.  If you have any ideas to put forward, please give us a call or email parkinsonspark@gmail.com.  We would be grateful for any evidence that anyone can give – all little bits of information can help build up the picture.  In addition,  please let us know (as well as the Police 101)  if you see anything at all suspicious – call, email, Facebook.

For the moment, we are not going to clear up the mess until we have an action plan for tackling this issue – we will leave it as is.  Please be vigilant in the Park and watch out for broken glass and other debris that could cause an accident.

Director and Vice Chair of Friends of Parkinson's Park CIC, Chair of Aireborough Neighbourhood Forum and Facilitator of Inskip One-Name Study. Has a degree in Local History (University of Cambridge), and Economics (University of Leeds). Now retired after a career as a Business Analyst and Advisor.
View all posts by Jennifer Inskip Kirkby →
This entry was posted in Regeneration. Bookmark the permalink.
Loading Comments...