Midsummer Magic Comes To The Park

The Tales Told Festival 2017 finished with a display of dancing lights.  The evening started with a Lantern Parade winding up Kelcliffe Lane from the 150 year old Guiseley Town Hall to a festival in Parkinson’s Park, and ended in a five minute firework display that lit up the summer evening across the ancient glacial valley.  The lanterns were homemade during the Tales Told festival, the fireworks,  courtesy of Britannia Fireworks (who do the Guiseley Lights Fireworks and the Rawdon Cricket Club Fireworks).

Earlier,  music was supplied on an improvised woodland stage by Martha Phillips of local group The Elephant Trees, who has/is supporting KT Tunstall.   At the quirky end of the scale was the enjoyable Laurence Marshall One Man Band, fresh from recent success at Glastonbury.  He got people snaking around the Park in a conga line singing ‘When The Saints Go Marching In’.

Games kept children from small tots to teenagers busy, including a Creation Station;  whilst a tug of 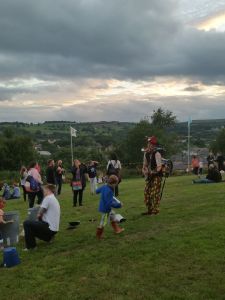 war between Guiseley and Everywhere Else got the adults joining in (from young to older).   Best of three was possibly Guiseley, although there maybe other views on that !!

It was unfortunate that the fire-eater and pancake stall could not make it – but the pancakes were replaced by homemade cake instead,  and a stall selling books for anyone who wanted a quiet read under a shady tree.

Even the weather decided to play ball; it was a lovely evening after the earlier grey drizzle and as darkness came in fairy lights in the hawthorn and rosebay willowherb around the Park  looked like little glow-worms.  The evening was recorded for posterity by local photographer Darren Sanderson, who will have pictures on his website soon, and will no doubt go into the archives of Aireborough Historical Society alongside other historic community events.

A very big WELL DONE to Codswallop CIC, Jacob and Lucy Phillips their families and team – including some Guiseley School work-placement students, for putting on the show and the whole of the Tales Told event.  The event will continue in 2018 and the company are looking for next years sponsors.

A thank you also to all the friends of Parkinson’s Park, who helped publicise the event across the area making especially sure that animal owners, local householders and parents of young children knew of the fireworks display; also those friends who helped  get the Park ready, filling in small pot-holes, mending gates and doing a tidy up afterwards.  One dog walker remarked on Sunday morning, that she was amazed at how tidy the Park was, considering all the people who had been enjoying themselves – a compliment to all involved who worked so hard to make memories for people to enjoy, and to bring residents together.

“If we shadows have offended,
Think but this, and all is mended:
That you have but slumbered here,
Whilst these vision did appear;
And this weak and idle theme,
No more yielding but a dream,
Gentles, do not reprehend.
If you pardon, we will mend.
And as I am an honest puck,
If we have unearned luck
Now to ‘scape the serpent’s tongue,
We will make amends ere long,
Else the puck a liar call.
So, good night unto you all.
Give me your hands, if we be friends,
and Robin shall restore amends.”