Pictures from A Gala

Once again the sun shone on the Parkinson’s Park Children’s Gala as Guiseley Brass Band played and Professor Dan twisted his balloons into mermaids and entertained the children.  A ‘flight’ of fairies flitted around the Park getting their faces painted for the Fancy Dress Competition – which was won by Harry Potter!  ‘He’ said that it was great to win his second Children’s Gala!!

The Scarecrow family did think they too would join in and show off some of their exotic creations but were hampered by trailing feather boas, lace aprons and lengths of beads – the Dad’s had done a great job!!!

Painted rocks were avidly hunted for (but not necessarily found) and the red devils in the community orchard were plucked from the tree.  For those so inclined,  they could put themselves in the stocks to be pelted with wet sponges by their offspring – or any others passing by.   Parents got their own back on the orienteering, shouting ‘competitive’ instruction at children trying  to navigate the  route.  If it all got too much there was a tent with massage going on !!!!

The ice-cream man was far more popular than some years, and the cafe was doing well until the table with coffee pots did a wobbly – the grass needs a bit of watering this year.

Those of a more serious nature could contemplate pictures old and new in the neighbouring tents of Aireborough Historical Society (great tent) and Aireborough Camera Club (nice tent), whilst the Friends of Parkinson’s Park stall had thoughtful questions to pose on what people want to see improved in the Park – the answer was the same as usual,  ‘dog litter’ !!

Thanks go to everyone who helped on the day from Litter Free Guiseley (who cannot help with the doggie issue),  to the people who put up the equipment and cleared up afterwards,  to all those who ran a stall,  fetched and carried, and took on the perilous task of fancy dress judge.  The Gala Committee once again did an excellent job. 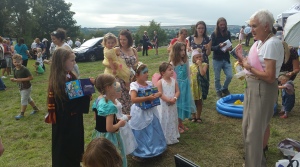 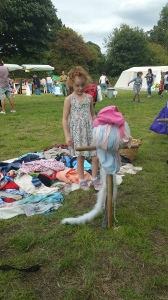 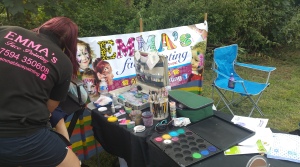