continued ………………..A timeless place to inspire the people of Guiseley

As we moved into more recent times personal stories became an important part of the All Our Stories research.   People remembered that at the entrance to the park were put notices for all to know that the Park, whilst belonging to Parkinson’s, was for the use and recreation of the people Guiseley .   Thus, it became a place for the local children to have adventures, play hide and seek, fly kites, and, best of all,  sledge down the hills in winter on the snow, and in summer on the grass.  The ‘Snowdrop’ was the sledging run down the steep slope of Great Brow, and the ‘Bluebell Run’, was on the more gentle slopes of Crooked Lands.  Since then children have added the ‘Suicide Run’ down the steep area above the old car park, near the woods.

For the older folk,  the seats,  the fabulous view, and the spirit of the land gave rest and

inspiration – a deep link, to different, more rural times.  The corner of the Park, near the churn stands on Kelcliffe Lane, had a triangular walled area, known as ‘old man’s corner’ – where people came to sit to watch the sun setting in the West of a summer’s evening.

It was a place where grandfathers took their grandsons to reminisce and learn country ways,  and for mothers to take the little ones on nature walks: the park was a boon to dog walkers and factory workers alike.   In the Netherfield corner they had their own annual bonfire party, where all the children spent weeks chumping for wood,  and on the slopes of Clapper Brow the huge, stately trees were used for rope swings and collecting conkers. 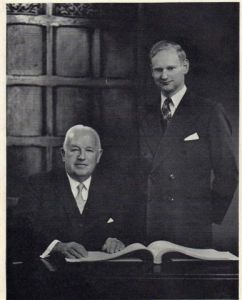 But, in 1968 Cromptons was taken over by Hawker Siddeley Aerospace, and many trace the company’s demise from that date.  Albert Parkinson died in 1971, and the family friendliness of the firm slowly dwindled.  The following decades saw uncertainty grow with various buyouts and takeovers, until a final sale was made in 1999 to Cooper Industries. Cooper’s asset stripped Cromptons, and the factories were eventually closed.

In 2002, the land was sold to St Modwen Properties PLC,  by Brook Crompton’s of Huddersfield.  Not being locals, neither company knew anything of the Park’s history or use, and the unmanaged land began to rewild.  The copses grew and filled up with rubbish and drug takers,  the grass became a ‘dogs toilet’.   The handmade heavy wooden gates fell into disrepair, or went missing, whilst a ‘Sleeping Beauty’ thicket grew up around Jonathan’s oak trees hiding their grandeur, and the ancient stone walls began to crumble.  In 2006 Bellway dismantled the Crompton Parkinson factory, pulled up the bowling and putting greens and erected fences that blocked off the ancient track along the bottom of the park.