History – All Our Stories

In 2012 the FOPP were given a grant from the Heritage Lottery Fund to research the history of Parkinson’s Park as part of the Great British Story.  A heritage project designed to celebrate the Diamond Jubilee of Queen Elizabeth ll by telling All Our Stories, the history of ‘ordinary’ people.  Little did we know what an interesting story we would find. The research and interpretation were done by local historians Jennifer Kirkby and Barbara Winfield, two of the founder members of FOPP . 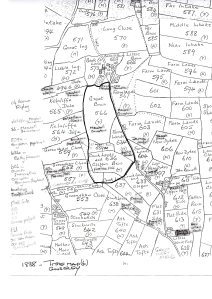 Outline of Parkinson’s Park on the 1838 Tithe Map

On the Leeds tithe map of 1838 the fields that now make up Parkinson’s Park are shown as meadow and pasture.  They sit on the side of the Chevin below Whale Jaws Hill, between Kelcliffe Lane and the flatter valley floor of Greenshaw Close and Kelcliffe Dole.  Guiseley at that time was still, just about, a rural pastoral farming and weaving community, but the industrial revolution was gathering pace.  The land of the now Park belonged to local farmers, Marshall Grimshaw of Kelcliffe House,  Benjamin Popplewell from Upper End Farm, as well as Betty Pawson from Guiseley, and Mrs Frances Foss who lived in Scarborough but came from a longstanding local Quaker family.  This time of change from the old world to the modern was the starting point for research on the Park’s story.

Names are a window on the past

The tithe map gave us the field names; these then were our first window on the past; who gave the name, why, and when, and has it changed.  In old documents field names are like maps, and always recorded. Different eras have different naming conventions and use of language, but names do change with time so noting acres, rods and perches is important.

The area around the park has been known for centuries as Kelcliffe (spelt in a variety of ways).  The name is Old Norse for a steep area where there are springs – an apt description for the local geology.  This tells us that the name has been in use since the viking era when Guiseley was part of Jorvik ( AD 866-950) and people with names such as Ivan the Boneless and Eric Bloodaxe rode across the Chevin between York and Dublin. The local area has many Old Norse names.

The steep part at the north-west end was called Great Brow in 1838, but research on old deeds quickly revealed that Marshall Grimshaw had brought the land in 1837 and renamed a lot of the fields.  Great Brow had been called Potterton Brow.   This, we eventually found, was the name of a local family – John Potterton was ‘buried by the Parish’ in 1713, and a Potterton is listed as a manor tenant in 1675.

During the 17th century the medieval common field system gave way to ‘enclosure by agreement’.  That is to say, the manor tenants agreed amongst themselves to divide up the common fields and then swap portions so that they each had a bigger area in one place.  They then walled off their plot. There is a 1639 enclosure agreement in the Guiseley Parish Records, doaling out the Common Close to 13 families.  This was also a time when land was being reclaimed from the common – a practice called intaking recalled in places such as Intake Farm.   These new walled areas, often called a close,  were then named after the family that occupied them.  But what was often lost was the ‘medieval name’ – where now is Raven’s Toft?

But why had Marshall Grimshaw renamed the fields?   Further digging revealed that the Kelcliffe House area and its tenements had been a tannery since at least the 17th century eg Tanhouse Brow had been the name for the area behind Hillside Avenue.  Further work on owners, including the Driver family, and past sales confirmed this.

The tanning of leather was very important in rural communities, not only for clothes, but for buckets, harnesses, and the belts that ran the looms and farm machinery.  Tanning was a smelly business often kept away from a village, it needed oak bark for tannin, urine and running water, as well as a good supply of cows and sheep.  Kelcliffe had been a perfect place where large tan pits had been dug and skins hung to dry in the wind.  But in 1837 tanning was being industrialised and Mr Grimshaw was building a new dairy farm for a new market !!

The name Clapper Brow, the very steep part where the wood now is, hinted that there might have been a medieval rabbit warren there; Clapper is middle-English for ‘rabbit hole’.  Rabbits were farmed at various times during the past – a good source of food, fur and leather.  After the Black Death in 1348, when there were  fewer people to cultivate land, was one such time.  The Odda at Hawksworth was also an old rabbit warren and there is an Iron Age hill fort in Bedfordshire known as Sharpenhoe Clappers later used as a medieval warren.  Warrens need sandy soil and slopes.  However, we have not found conclusive dating evidence yet,  only the name, which goes back to at least the 16th century.

One of the most interesting field names in the park is Crooked Lands, the area to the South East, between the farm gate and Greenshaw Terrace.  The meaning of this name became clearer during a geophysics exploration (which was done with the same team used on the television series Time Team) that we commissioned in 2013 as part of the project.  This revealed that the banks were early medieval lynchets and headlands – highly likely to be pre 1066 – or Anglo Saxon.   That took the Park’s history back to perhaps the 8th century. 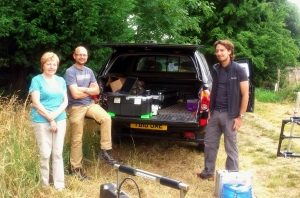 Barbara Winfield, with Jimmy Adcock and Finn Pope-Carter from the Geophysics ‘Time’ team.

Crooked Lands refers to the banks and their slight backward S shape, which was caused by the way the land was ploughed with teams of Oxen.  Early court rolls of the Manor show that local farmers were forever being fined for taking their carts over Crooked Lands to the West Field.  The West Field was one of a three field, open field, system – and was around the top of Kelcliffe Avenue/Lane, and the fields and houses behind the school.   It is also the reason for Crooklands house being so-called. 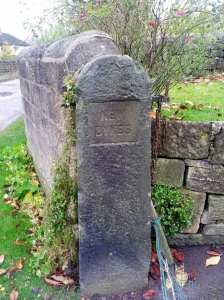 Names of the fields, and an analysis of stone wall construction around the Park, indicated that the whole area has been in use from very early times, certainly well before 1066.  Flatts, which gives its name to local houses Flatfield  and Top’o’t’Flatts is the area of The Sycamores.  A flatt was a bundle of furlong long farming strips which were each farmed by different tenants of the Lord of the Manor.  New Dykes, means an early extension of cultivated farming land on to the Common.  The geophysics survey took the potential archaeological remains back to Romano-British times (AD 43 – 410) .  All of which was a lot more than we had thought we would find when we began the All Our Stories project !!

2 Responses to History – All Our Stories

This site uses Akismet to reduce spam. Learn how your comment data is processed.